And only the English need to pay…..

As Thursday comes near, the game becomes nastier. The breaking of the UK must have the planet’s less nice scumbags and GFNs chortling into their latte (whatever that might be) and gleefully rubbing their hands over a potential strategic advance. The Global War, for that is what it is, is against English liberalism and no other thing. Only this stands between Man and the Endarkenment. It has been like this for almost 150 years, but this time they’re on the Garden Wall.

Tony Blair, remarkable in this spat for keeping his head well down (wouldn’t you?) and only making one quick guest appearance, is the proximal cause. Wanting to make Scotland one entire Socialist Pocket Borough so that conservatism would never be near government again, he began the bribery auction in the late 90s. What he achieved in fact was a true nationalist-socialist victory instead – and I don’t need to say what those words mean. This was the inevitable result of “devolution”, coupled with vast money transfers North, to provide the appearance of efficacy.

Almost at the deadline, we have numbers of fellows and others wheeled out to say how negative the consequences would be if Scotland votes to go. Here, here, here and here, for example. Oh, and here too.

If I was a ScotzNatz, all these sad hand-wringing negative pleas and gestures would only serve to harden my resolve to say “Yes”. Perhaps the BritishPoliticalEnemyClass is playing a double bluff, and actually _wants Scotland to go_ , but I doubt it. It would mean almost certain oblivion for the LibDems and the improbability of a Labour government in England and Wales ever again. These awful people can’t be that stupid as to not think of this since Socialist-LibDems, Socialists and Socialist-Tories are now part of the monochrome furniture of British political-class-looting and mooching.

In the last 24 hours, the BritishPoliticalEnemyClass has resorted to naked bribery. This one trigger flipped me. That was it.

Up till one minute before I was printing and saying in several places the fact that I’d prefer the Scots to stay, even if this would prolong the time in which we’d have our noses rubbed yet again in the shit of more socialism in England. The silver lining to that particular cloud was that UKIP might gain more power more quickly in England if not elsewhere. But in the event of a “No” victory, I learned that England would be charged even more and get less. So that was that then.

The only tragic – really tragic – result of all this sad business, is that the English People have been made very very angry, and for what? Socialists that broke up our nation, on purpose, for their own ends. It’s also brought home to us how put-upon and abused we are, and how silent we have been. Please go now, Scotland, please go. I am personally sorry, for my eldest son studies brilliantly at one of your ancient Universities, loves Scotland and is doing well, and we now love Scotland because he showed it to us, which we never before knew. It is a family tragedy for us as well as a grand political one, but really, Scotland, you must go now, and “Dree The Weird” that “ye have sought”.

And then, too, as it says on the side of Strathacro Services, 37 miles south of Aberdeen on the good old A90…YE MAY GANG FAUR AND FARE WAUR”. … Go on, Scotland, please now, and GANG FAUR….Please leave us, if that’s what you want. We’ve had enough of being made to look like bad-guys. 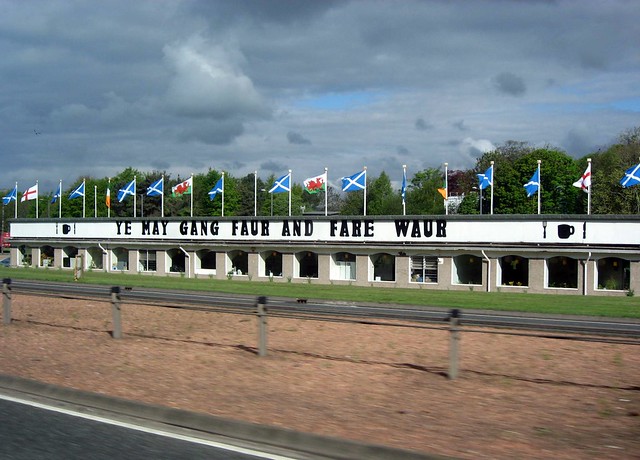 7 thoughts on “The buying of Scotland: Fascist hucksters trying to outbribe each other”