“How to Judge People by What They Look Like,” Reviewed by Sean Gabb 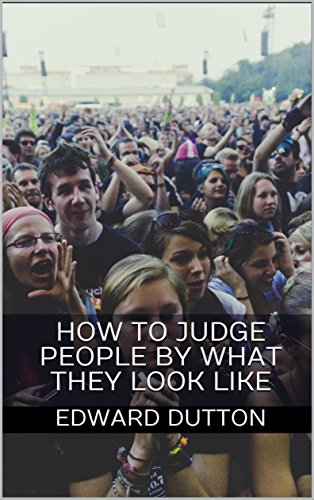 This short book is equally naughty and entertaining. It bounces along, making its points in a light-hearted and generally a witty manner. It is naughty so far as it is a flat challenge to many of the pieties of our age.

We are told never to judge a book by its cover – that the substance of a person, this being character and intelligence, have no measurable relationship to his external form, this being his physical appearance. At the extreme, of looking at correlations between race and intelligence, you can get into serious trouble for disputing this piety. Even moderate dissent earns hostility or just ridicule. Look, for example, at the relevant textbooks. The phlogiston theory is covered as an early theory of combustion, superseded by the truth. Phrenology is denounced as barely short of a moral and intellectual failing. No one thinks ill of Lamarck for this theory of inherited characteristics. Lombroso and his measurement of criminal heads are seen as steps on the road to Auschwitz.

The author of this book takes aim at every one of these pieties. He begins with the easy targets. Within ethnic groups, he goes over the increasingly rehabilitated claim that intelligence is largely inherited – about 80 per cent. He adds the other increasingly rehabilitated claim that there are differences of average intelligence between groups – that the peaks of each distribution curve occur at different points along the scale.

This done, he sets about demonstrating that the substance of a person is, on average, shown by his external form. He groups his argument under the two headings of innate and acquired characteristics. Either external form is a direct indicator of substance, or it is modified in the light of cultural facts to indicate substance.

First, for example, he looks at fat people. Obesity often indicates poor control of impulses. As such, it may be a sign of lack of consciousness or lack of intelligence. Conscientious people take care not to eat more than they need. They also understand the long-term cost of giving way to short-term impulses. Intelligent people are able to judge what foods are suitable for them and what are not. “It follows,” the author says, “that the person who is ‘slim’ or who has maintained a healthy weight is going to be relatively high in Conscientiousness, low in Extraversion and relatively high in intelligence.” [p.14]

This Book is Free to download, or buy a hard copy

Second, and perhaps more interesting, he looks at the relationship between substance and external form as mediated by culture. Until the industrial revolution, the majority of working class people laboured in the fields. This made them darker than the higher classes, who spent much of their time indoors or wearing elaborate hats and clothes. A suntan was seen then as evidence of low status, and perhaps of low intelligence and all else that correlates with low economic status. Then the majority of workers were herded into factories, while the higher classes discovered the joys of an outdoor life. Now, a suntan was seen as evidence of high status. More recently, with the availability of cheap package holidays, we have returned to the pre-industrial correlation between suntans and low status.

Now, what follows from all this? The answer is that all truth is important – so far as this is the truth; and I do lack the statistical grounding and the time or inclination to check the author’s scholarship. Even when a particular truth has no practical value, a regard for truth is a generally useful prejudice. But there are certain conclusions that appear to follow.

First, there is has been a progressively greater diversity of external form since the industrial revolution. The stated reason for this is that the harsh conditions of a traditional society, in which about 40 per cent of children died, and the higher classes had more surviving offspring, created a strong bias towards the survival of the intelligent and conscientious. Since then, the fall of infant mortality towards zero has thrown this process into reverse. That may explain the growing fall in genius or just high intellectual quality as a fraction of modern populations. It may also explain the decay – and the author says nothing of this – of free institutions, and their replacement by less complex and more maternal forms of government. Old England was free because its people were capable of being free. Modern England is unfree because the people have changed.

Second – and, again, the author says nothing explicit here – the modern celebration of diversity, and insistence that every group should be represented in every part of national life according to their proportionate share of the population, is at least misguided. People are different in their abilities, and this is shown by their appearance, and it is unwise to try arguing with the facts.

Third – and this is discussed by the author – many old prejudices about the choice of mating partners and friends and business colleagues may be grounded in the facts that his statistical research appears to have uncovered. On this point, I know a former professor at an American university who, towards the end of his career, gave up on grading his students according to the quality of their written work. Reading tens of thousands of words was far more inconvenient, and gave no more accurate basis for judging, than a quick look at their faces in the first teaching session.

I would not try this myself as a guide to assessing my students. As said, I do not have the ability or time or inclination to check the author in his various claims. But his claims are interesting, and they are made with at least a good show of reason. I therefore recommend his book as an object of discussion.