Reflections on the importance of the medieval English parliament
Keir Martland
(Feast of Michael and All Angels, 2017)

What was the importance or significance of the mediaeval English parliament? This is a vast question and my thoughts on it are particularly difficult to articulate, but I think it requires a lengthy process of ‘setting the scene’ to begin with. To put the disputes between kings and representative institutions in their proper context, it is important to consider earlier mediaeval notions of law and kingship. The early mediaeval ‘customary law’ was not one of sovereignty, like the Roman law – whose famous maxim put it ‘whatever has pleased the ruler has the force of law’ – but one of compromises worked out according to a few immutable principles. In such an understanding, law – being the law of one’s fathers – was good because it was old, and old because it was good, and law was sovereign. The king was under the law, bound by it, and his very existence was predicated upon it. Indeed, the mediaeval Icelandic constitution functioned well without a king for centuries, with only one part-time ‘government employee’, a single lawspeaker. Furthermore, since ‘feudal’ relations were essentially personal ones of reciprocal rights and duties, territoriality, like sovereignty was alien to the mediaeval social and political order. As Frank van Dun has it in his essay Uprooted Liberalism and its Discontents, “…power rested on personal allegiances between freemen. Thus, the feudal lord-vassal relationship was not a transitive relation…” Tacitus’ words might well be applied to the early Germanic or barbarian societies, ‘Nec regibus infinita aut libera potestas’ (Their kings are not unlimited or free). END_OF_DOCUMENT_TOKEN_TO_BE_REPLACED 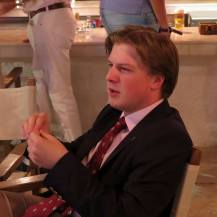 On the evening of 27th September 2017, I visited the boys at The Oratory School to give a short talk. I gave no title at the time, but a title which suggests itself retrospectively is ‘The medieval roots of European freedom.’ Here is a very brief outline of the 30 minute talk:

How do we explain freedom or liberalism? Any Little Englander will tell you that England is a bit special, but there are other such places in Europe worth investigating. Racialistic accounts, such as in Mein Kampf, and other accounts such as Max Weber’s, of how small countries like England and Holland came to dominate the world, are flawed. Explanations of the ‘European miracle’, too, are mostly confused, often lapsing into 19th century historicism. Rather, we must look to how our early and high mediaeval forebears thought about and practised law and kingship to come to a better understanding of liberal England and liberal Europe. After all, it was in the mediaeval period that the foundations of much that we hold dear – whether economic, political, cultural, or religious – were laid. Ideas and practices worth considering here are: strong kinship bonds; fealty; oath-helping/compurgation; the sovereignty of law; the absence of sovereign territoriality; the absence of the Divine Right of Kings; the consensus fidelium; the right of resistance etc.

A Homecoming: Another conference of the PFS
Keir Martland
21st September 2017

I arrived home a few days ago from the 12th annual conference of the Property and Freedom Society (PFS) in Bodrum, Turkey. Just like last year, and the year before that, I am missing everyone and everything already. For, as so many attendees had told me and as I myself now understand, attending a PFS conference is like a homecoming. This was my third conference and the most enjoyable yet for me. At the risk of exaggeration, I feel rather homesick being back in England! END_OF_DOCUMENT_TOKEN_TO_BE_REPLACED

For the chance to win £500 and have your essay published by the Ludwig von Mises Centre UK, write and submit one of the following essays:

The author of the winning essay shall also receive an invitation to speak at a Mises 2018 conference.

We are looking for either undergraduate quality academic essays or well-argued opinion pieces of a publishable standard. Essays must be between 2,500 and 4,000 words (not including footnotes) and should be e-mailed to martland@misesuk.org

The deadline for submissions is 12th December 2017. The winning essay will be revealed on 12th January 2018. Any runner-up essays shall – the author permitting – also be exhibited on the misesuk.org website.

(Do not give in to evil, but proceed ever more boldly against it)

Keir Martland: In response to the violent white supremacist ‘Unite the Right’ rally in Charlottesville, Virginia, I thought that I would re-print the text of Erik von Kuehnelt-Leddihn’s 1943 essay ‘Credo of a Reactionary.’ Kuehnelt-Leddihn was very far to the Right himself, which is what makes his own perspective on fascism, Nazism, and racialism so interesting. He was firmly of the opinion that an “extreme conservative arch-liberal” such as himself must abhor fascism and racialism. This essay is therefore a must-read for all open-minded ‘Alt-Right’ sympathisers, note in particular the distinction between patriotism and nationalism.  END_OF_DOCUMENT_TOKEN_TO_BE_REPLACED

This up to 50 per cent tuition scholarship for the PPE & Austrian Economics Master’s program is awarded annually to a student from the UK with excellent undergraduate study record and a strong interest in the teaching of the Austrian School of Economics and Ludwig von Mises in particular.

CEVRO Institute offers a unique world-class three-trimester long master’s degree program – Philosophy, Politics, Economics (PPE). PPE is an interdisciplinary program modeled on the successful PPE program at the University of Oxford. The program integrates the study of political philosophy, politics and political economy. The master’s program provides a unique understanding of current economic and political processes. The lecturers are renowned academics from leading universities in the Czech Republic, the USA and Europe. The program is taught completely in English.